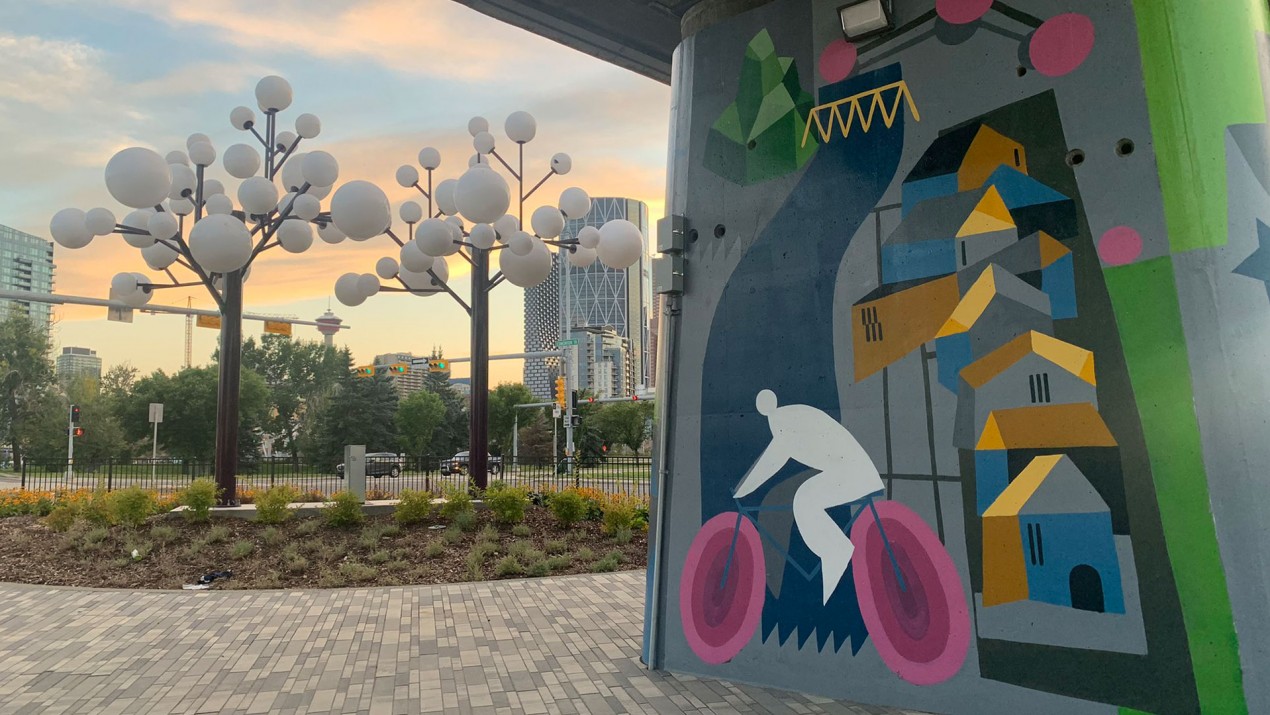 Case-study: The Story of an Under-Used Underpass

Imagined by a group of grade six students, Flyover park is a product of the wishes of the community to turn an uninspiring transit location into a safe and fun destination.

Now heading towards western Canada: in the third most populated city of the country, Calgary, an innovative initiative has proven to represent yet another victory for placemaking.

It is under the busy 4th avenue road connecting downtown Calgary to the residential neighbourhood Bridgeland-Riverside, that an under-used and generally neglected space was chosen to be transformed through a fruitful collaboration between the local students, community members, the city and donors.

Two aspects that made the project a challenging one were that, one: its location intertwined within a complex road interchange, and two: the questionable reputation tied to its lack of maintenance. Walking through one could encounter much litter, graffiti and even needles: making it unsafe and generally avoided by neighbourhood residents.

After five years in the making, this fully revitalized space is now frequently visited by people of all generations and backgrounds, cleverly bringing the community together. It’s certain that this new neighbourhood asset is an incomparable improvement to the gray underpass that previously stood empty for almost 20 years. 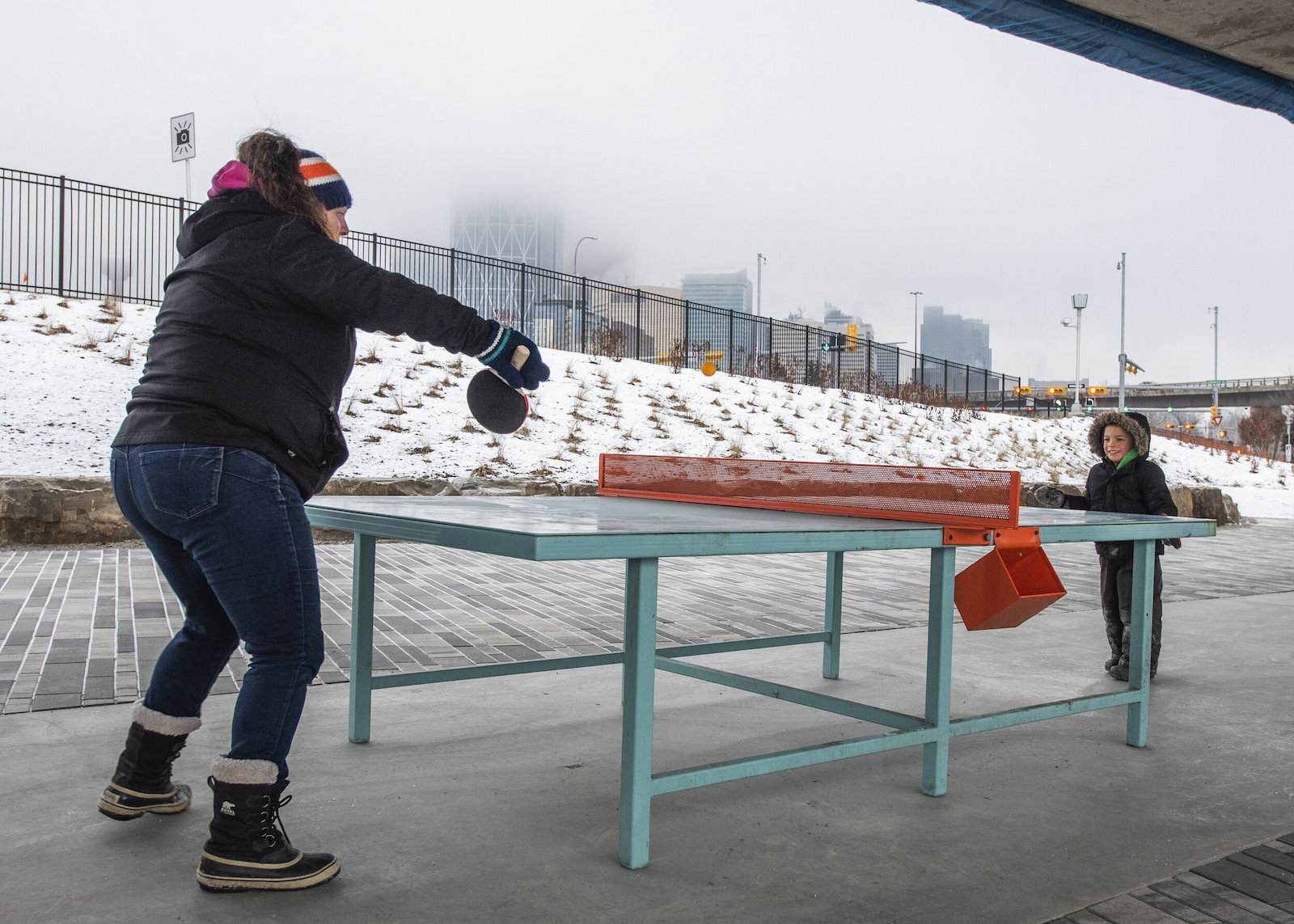 This innovative subsequent park project manages to blend unique playful features along with artistic elements that together beautify the space and create impact, all while being fully accessible and inclusive to everyone.

At a first glance, one will be impressed by the generous selection of games that are open to the public, free of charge. A few of these include shuffleboard, ping pong, ladder toss, tetherball and bocce ball. In addition to traditional playing modules, a friendship swing, where people of all generations can sit and enjoy a chat and a laugh in this fun arrangement.

A closer look at the park will reveal an array of other interesting amenities: seating designed from upcycled scrap tires, on top of benches and a few grassy areas for picnics. The bamboo jungle and a three-dimensional climbing parcours also provide the park with a fitness feature that encourages people of all ages to have an active lifestyle. 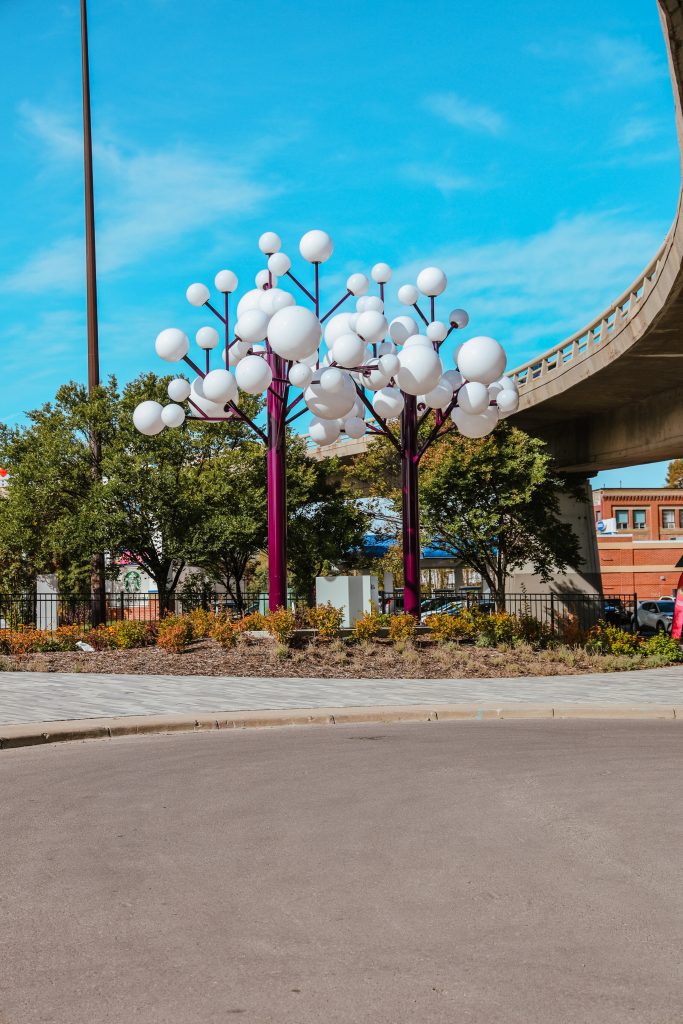 An interesting distinctiveness of the park is how it uses its natural characteristics to its advantage. We can see this notably with its hillside characteristic, which sets it apart from regular parks usually laid out on flat land. Additionally, its designers cleverly thought to optimize by integrating a slide feature through it.

It is a unique feature that has become the gateway characteristic of the park: its bubble tree light installation. Designed and conceived to provide different shadings of light that can change colours depending on the moment of the day. The ambiance set by its gentle ebb and flow is enjoyed by all, particularly by users that jog through at night and feel an enhanced sense of safety. It is a nice blend of artistic integration on top of the murals that dress up the pillars of the underpass.

On top of the alluring aesthetic, the park was also designed with environmentally beneficial elements. By upgrading the flyover infrastructure top area, water from rain can be diverted from the infrastructure’s roadway and into the park’s rain gardens and bioswale. This acts as a filter that cleanses the run-off water before it goes back into the Bow River, reducing the number of harmful minerals re-entering the city basins.

The most impressive element of the project is its design process, which is at the core of its success, as it represents the community from start to finish.

On top of being a popular residential neighbourhood, Bridgeland Riverside derives its charm from its homes that predate the 1960s and its variety of interesting local shops and restaurants. Thus, a young and diverse population that have chosen to call it home in recent years, and help make it one of the most vibrant communities in Calgary.

When members of this neighbourhood wanted to see the space transformed, it’s through the practice of tactical urbanism that the project managed to find roots in the neighbourhood and that it started to change the minds both from the city and residents’ point of view about the potential of the space. Tactical urbanism consists in trying out an idea on a small scale in a temporary fashion in order to prototype and evaluate its chances of success. This was the purpose for a floor mural that was painted in its core, right under the main overpass.

On top of being the project’s main initiators, members of the neighbourhood were also at the core of the consulting process as feedback from residents and stakeholders was collected both online and in-person throughout different phases. People could express themselves on what priorities were to be put forth in regards to the use of the space and even cast a vote to select one of the six options of park designs, using Calgary’s community engagement website. 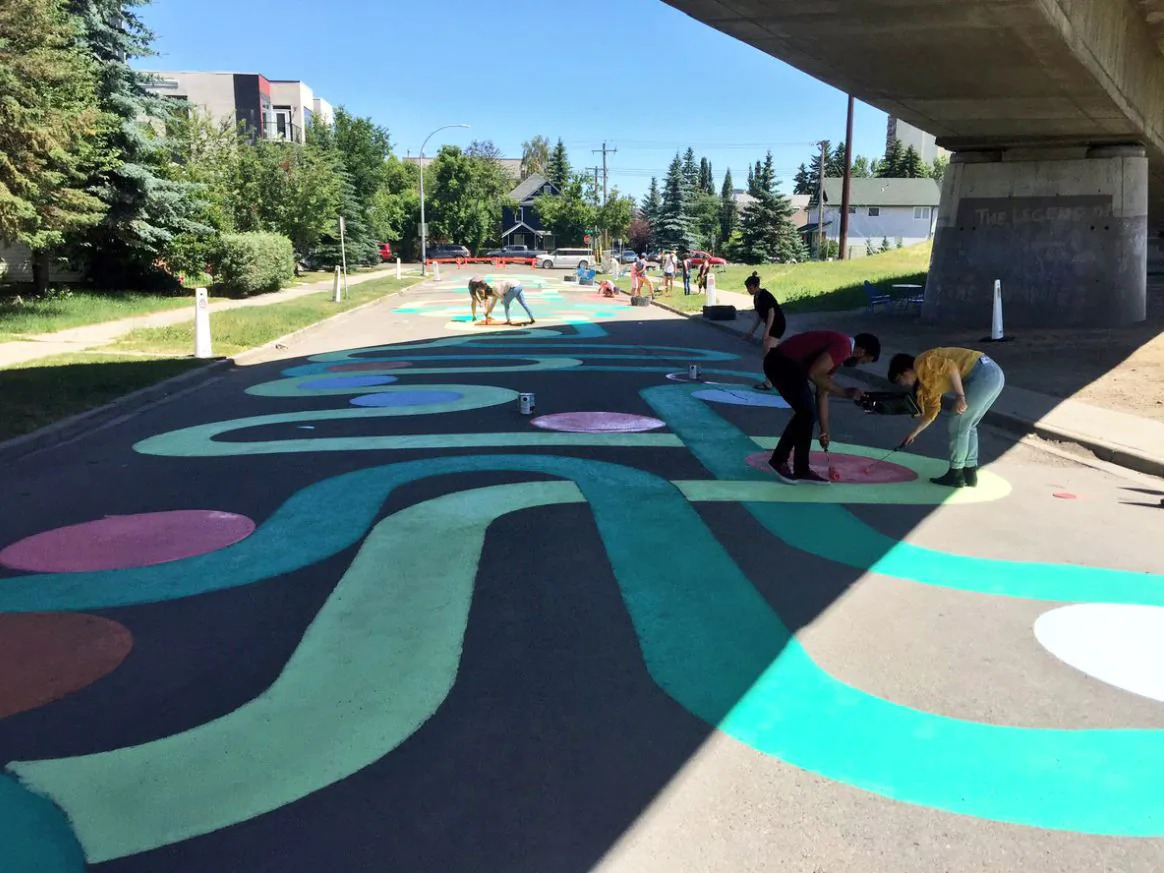 Agency to the Youth

As for the designs of the parks themselves, an innovative youth-led design program involved students from Landscape Architecture at the University of Calgary in collaboration with Grade six students from Langevin School. Together they embarked on the mission to create multiple concepts for how this space could be reimagined.

By using the feedback from the consulting initiatives, they could better understand what stood most important to the community, the top four themes being a welcoming community entrance, an interesting vegetation, public art and a lot of lighting. Another notable theme was the need for easier access for walking and biking, as this area is an important commute space for all kinds of transit routes.

Providing the project frame and the necessary tools to succeed, their input was impactful where it mattered the most, which was at the design stage. Moreover, by including these actors, not only it allows for a hands-on perspective of ultimate park users, it also sends a positive message about how their contribution is valued. At such a young age, seeing the impact they can have in their community enhances the sense of agency and empowers those generations to be actors in the change they want to see in their world.

To get to this final end product, and towards finding a collaborative design method, the project had to make proof to gain a form of recognition and to lure in grants and investments from the city and various donors. Through the beforehand mention of tactical urbanism, other solid partners joined in the collaboration effort.

Bringing professional support to the initiative was Parks Foundation Calgary, a local non-profit, jumped in to help find the funds and the support necessary to successfully transform the space. For the last 30 years, this organization has been creating park spaces by pooling together resources from communities, donors and municipalities, and prides itself in its mission of being actors in the creation of cherished spaces for residents.

With their expertise, they could support the Flyover citizen-run project by bringing professional help in the areas of project management, all the while keeping the community involved through every step, and leaving the necessary space for project governance to the collaborative group effort of the young designers. 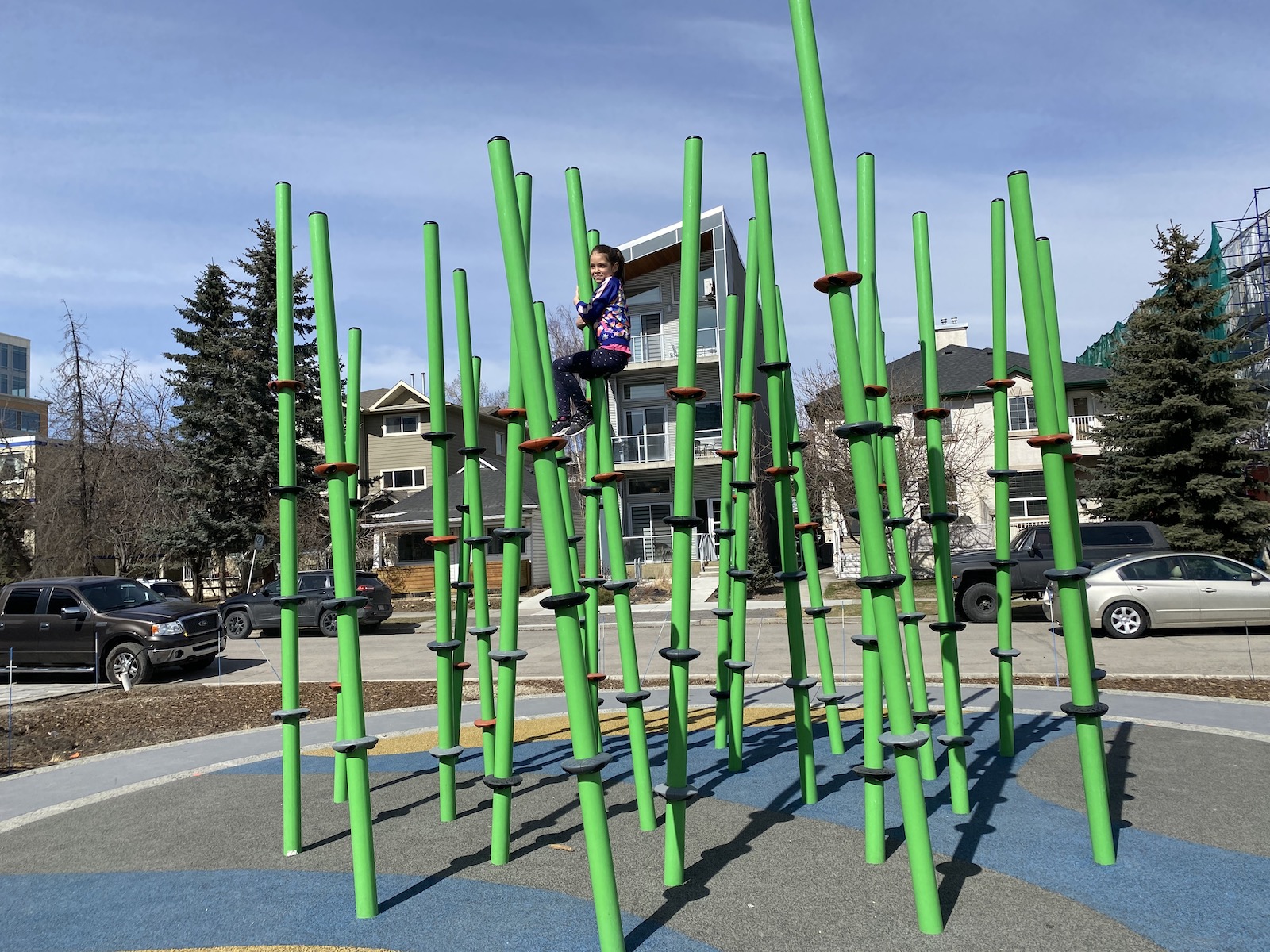 This park has contributed to Calgary’s innovative community engagement initiatives and is a promising project that adds itself to the impressive roster of parks throughout the city. Hopefully, it can inspire more initiatives of this kind in the future across the country, and they can improve the sense of citizenship and participation along with elevating the overall quality of life in an original and creative way.

Mural by Boris Biberdzic (cover image)
This article has been written by Veronique Dufour, one of our creative coordinators ❤️