In a recent collaboration with KPMG Montreal South Shore, MASSIVart proposed a series of artistic integrations to elevate the office and redefine it as a blueprint for progressive and innovative office spaces of the future. Creating an artistic direction that reflected KPMG’s brand, while also highlighting emerging Quebec artists, proved to be an exciting challenge. MASSIVart worked with a selection of artists and galleries to commission 14 pieces, including unique prints, photographs, paintings, and videos.

Each artwork tells its own unique story, and each one is worth sharing. MASSIVart spoke with selected artists to gain a better understanding of the artistic directions behind each artwork. Discover the compelling meaning of the digital artwork, photographs, and prints in the new office design below.

MASSIVart commissioned three art videos by graphic artist Alex McLeod for the KPMG collection – Gemroller, Brick Mountain, and Canyon. The digital work behind the reception desk creates an exciting atmosphere, brightening the spirits of both employees’ and visitors’ spirits upon arrival. 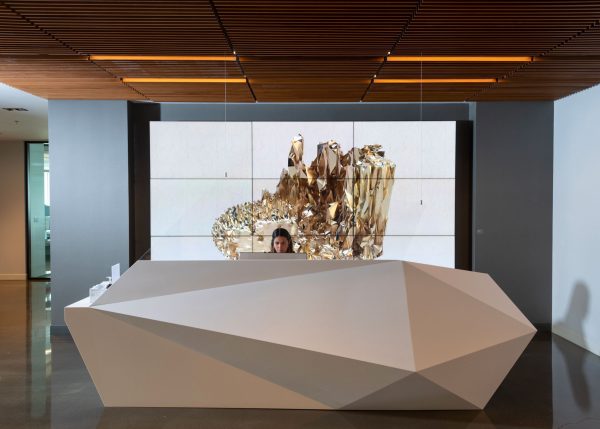 Mutating into themselves, these looping videos exist in the liminal space between sculpture and sentience. McLeod explains his artistic direction as a way to interrupt our familiarity. He uses materials such as scratched gold, that we know as solid, but then makes it fluid. “Sometimes making things squishy or move in certain ways reminds us of humanness, further connecting us to the world around us. Empathy is at the heart of my practice, often for space or the environment.” McLeod elaborates.

On the photography side, we spoke to artists François Ollivier and Gab Bois to describe their own creative visions of everyday things. Ollivier commissioned two artworks as part of the photography collection in the new elevated workspace. MIL is a photograph of the newest science hub building at the University of Montréal (UDEM). It appeared in an almost desert-like area at the limit of Park Extension, and is now a landmark in the city landscape. The building catches light and shines like no other which is the primary reason why Ollivier was compelled to photograph it. “But this beauty hides a darker reality”, he notes. Developers jumped on the opportunity of empty lands around to build hundreds of condos with almost no social housing, accelerating the gentrification process of Park Ex, one of the poorest neighbourhoods in Canada. 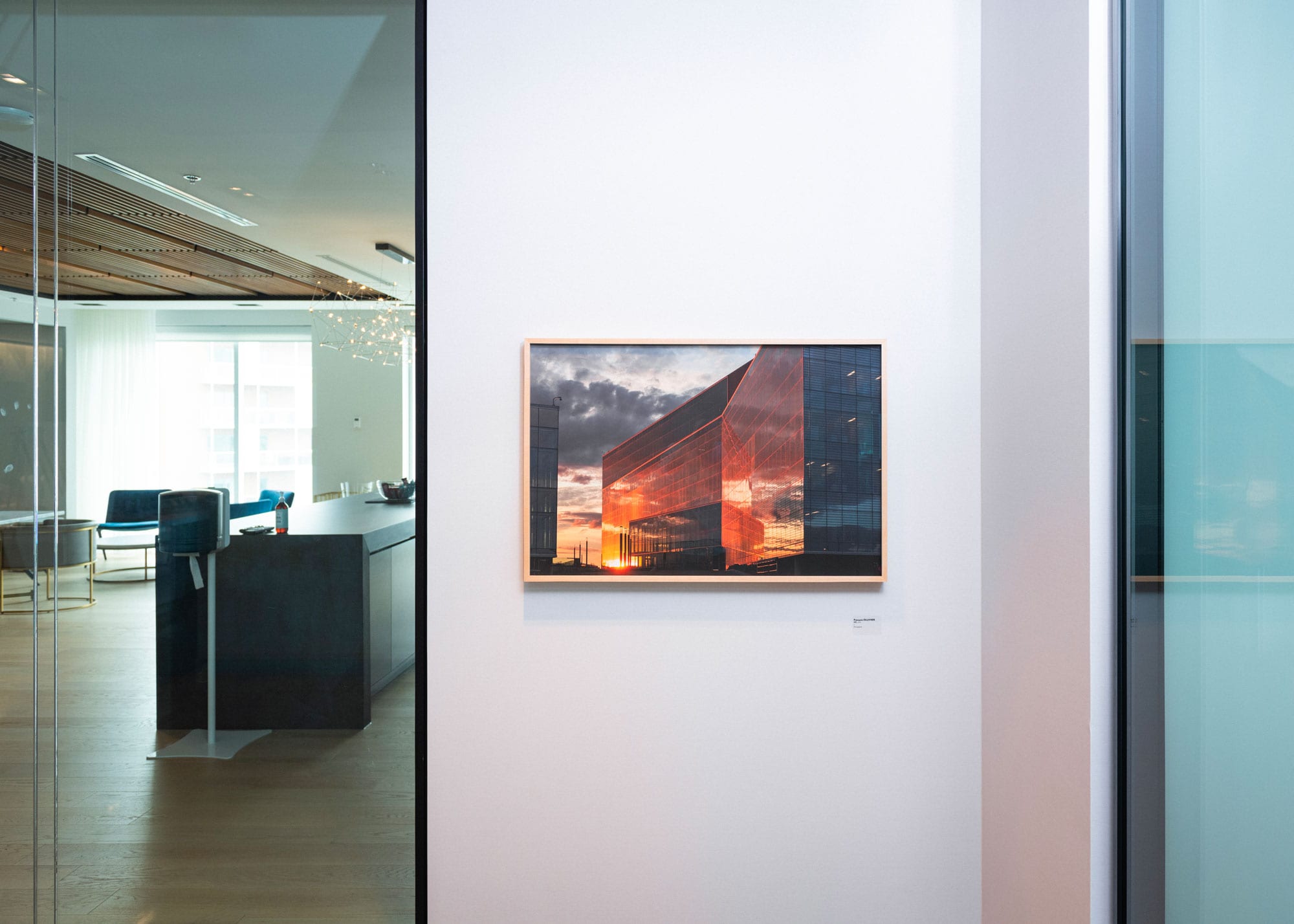 The second artwork, A Bright Interval, is part of a larger series also containing portraits of strangers. The commissioned piece is meant to question our ability to wander and contemplate things, or what is left of it. Light in autumn is fascinating and fragile. Everything is brightened by precarious reflections, fading out in minutes, even seconds. Consequently the work was based on time and instantaneity. Over a three week period, Ollivier wandered the streets of Montreal looking for clearings in the sky, to build a series of photos drenched in melancholia and a certain fear of always missing time. 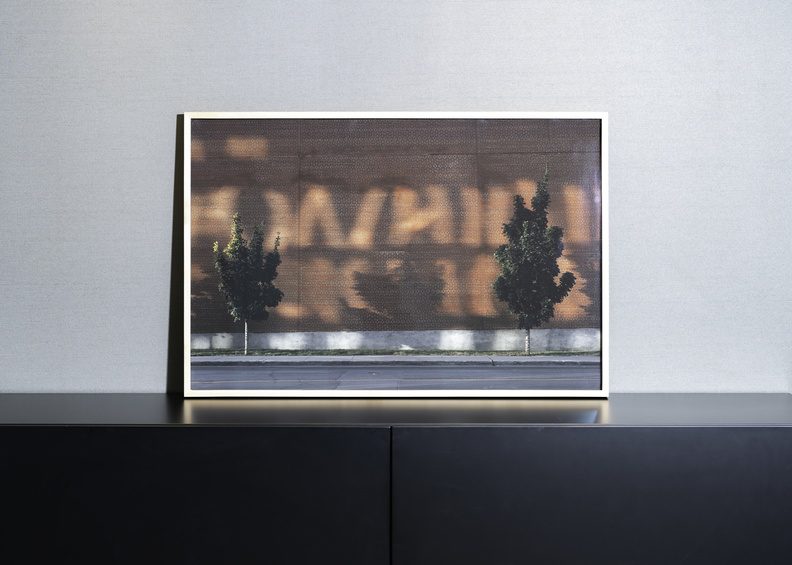 In contrast to Ollivier, whose photographs were both taken outdoors, Artist Gab Bois created four pieces in an attempt to bring a surprising aspect into the lives of ordinary household objects. “I have always been fascinated by objects: I collected tiny erasers, my parents’ monthly bus passes and all kinds of little treasures. Part of my creative process, which includes said pieces, is the extension of that childhood interest,” Bois reveals. Her artworks I take my sugar white with one coffee, Make or Break, and .png; are placed side-by-side in a conference room, adding an element of intrigue to what are commonly known as simple office objects. Her fourth artwork in the KPMG art collection, fresh phone who dis, resembles an ancient green cellphone from afar, yet from a closer viewpoint the cellphone is made out of a green chewing gum pack. 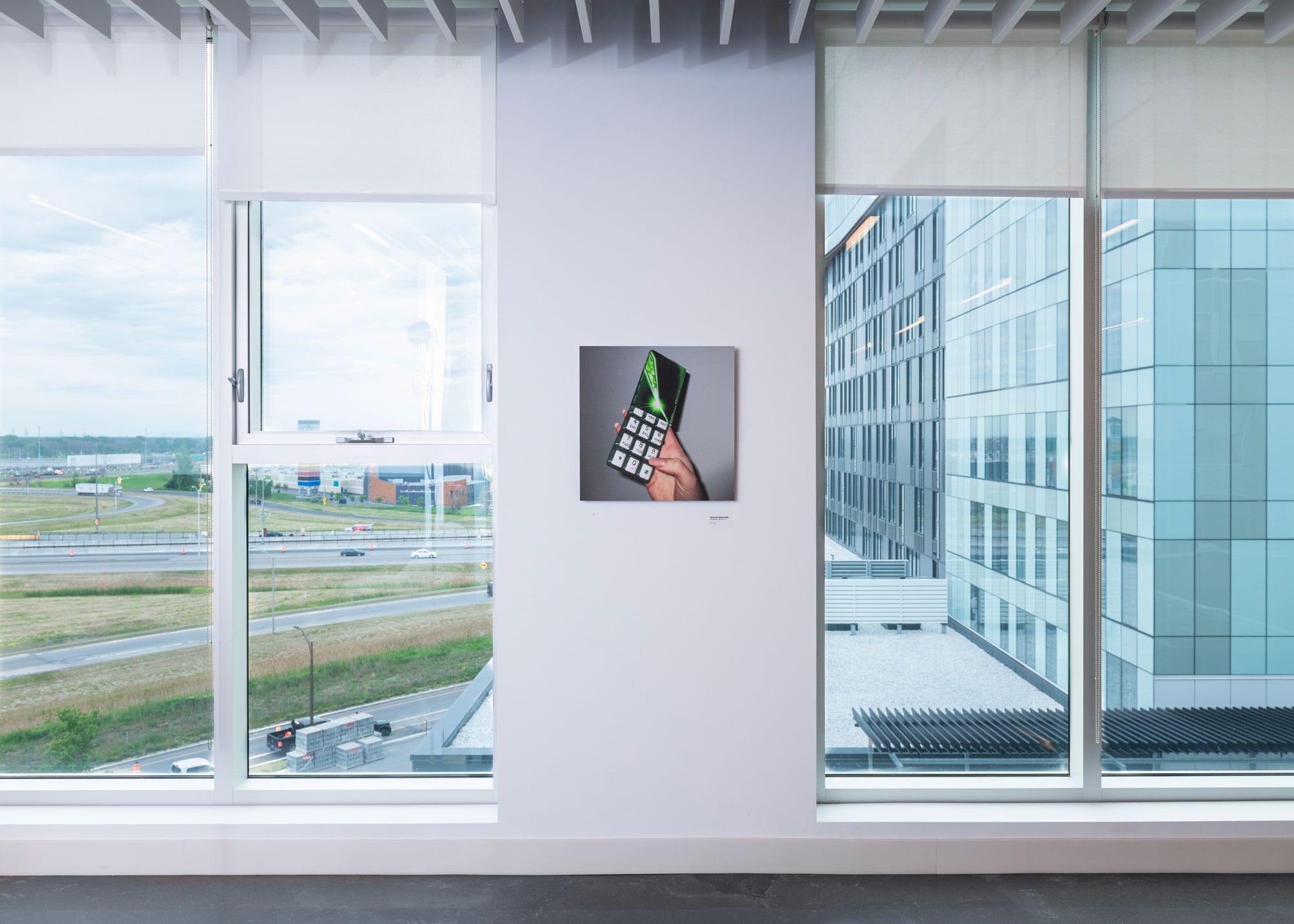 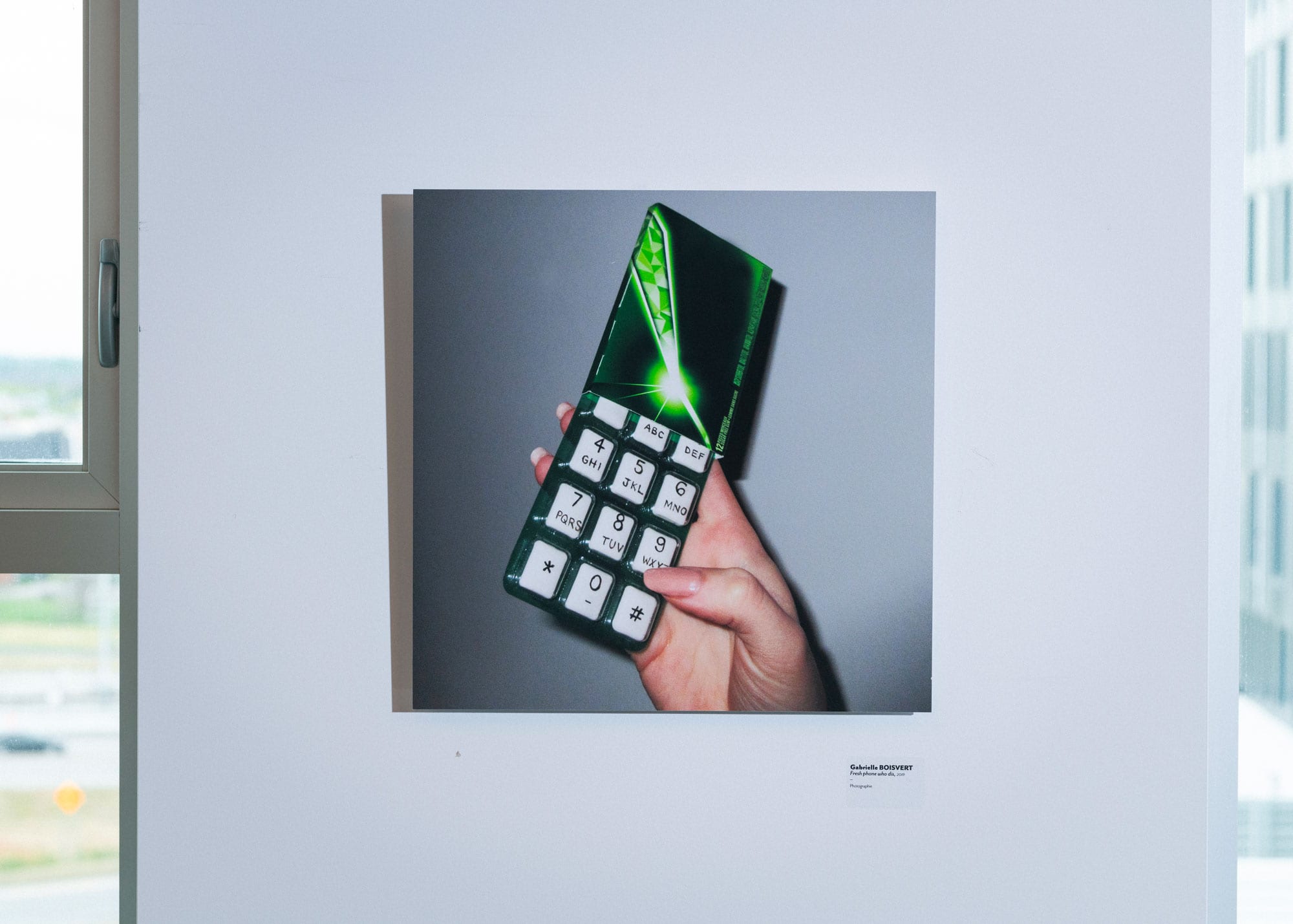 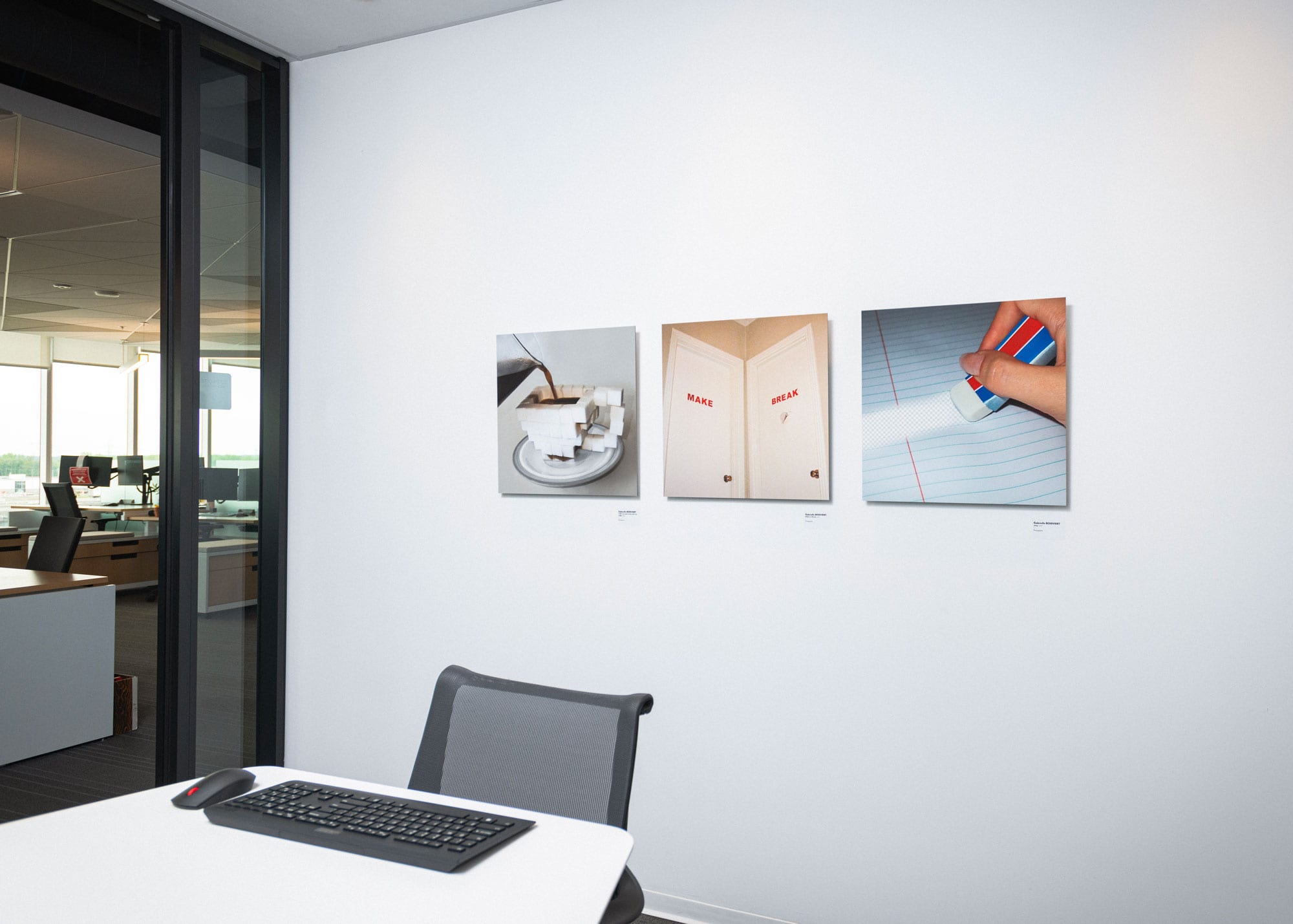 Finally, Sabrina Ratté magnified the common spaces through their digital works that have been printed as a way to make them permanent in the space. Her artwork Undream depicts an imagined future where utopia and dystopia collapse, inspired by the photomontages of Superstudio – a major force in the radical architecture and design movement of the late 1960s. The artwork leads the viewer through an isolated landscape, with a monumental structure suspended from above. The architecture morphs between impossible surfaces and underlying order, interfering with the landscape as it undulates in and out of existence. Swept up in this movement, viewers are suspended in an impossible abandoned territory between the built environment and the natural world. 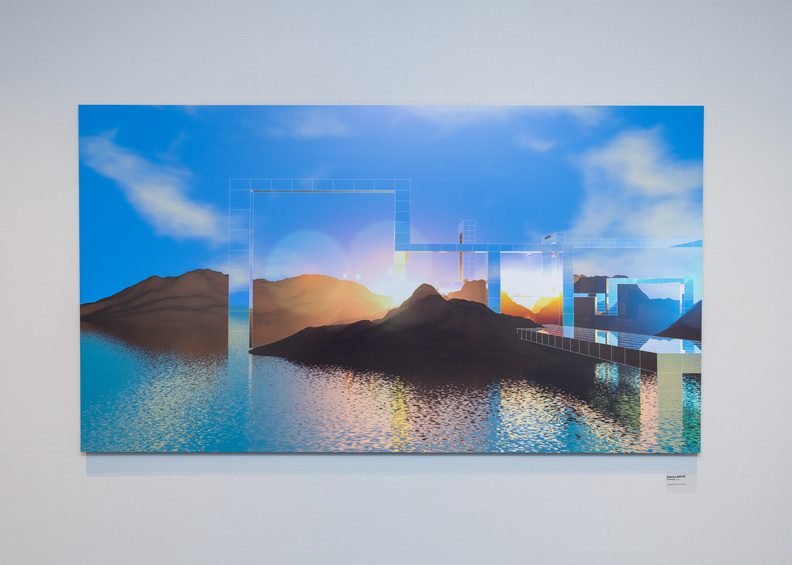 All of these carefully selected works contributed to the innovative and creative work environment at KMPG Montreal South Shore. Employees and visitors are sure to be inspired by the commissioned artworks in the new workspace for years to come.