Our latest major exhibition design project, through the eyes of our collaborator, the Musée de la Gaspésie 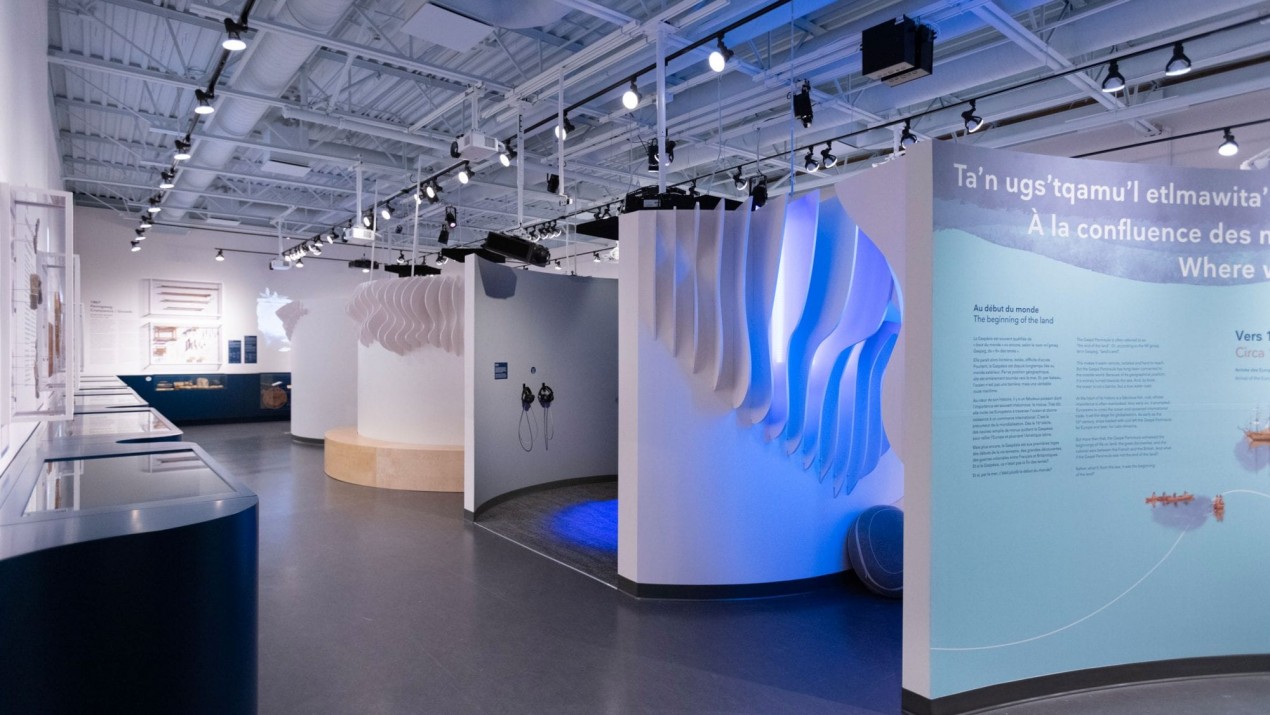 We worked closely with the museum team to find the most creative ways to tell the story of such a rich territory in only 2,105 square feet, providing them with a variety of expertise ranging from exhibition design to project management.

We wanted to give the floor to our partners at the museum – Martin Roussy, General Manager and Vicky Boulay, Curator – to tell you about this exciting project from their perspective. We invite you to listen or read them:

Introduce us to the Musée de la Gaspésie

Martin Roussy: The Musée de la Gaspésie is a regional museum whose mission is to protect the cultural and historical heritage of the Gaspé Peninsula. We have more than 6,000 objects in our storeroom, the archive center contains documents dating back to the 18th century. A dozen employees work to keep this place alive and dynamic, with nine Board of Director members and more than 20 volunteers who support us in our actions.

What about the new permanent exhibition Where Worlds Meet?

Vicky Boulay: The project of the permanent exhibition started five years ago, but most of the work has been done in the last year and a half. When we talk about a permanent exhibition, we are talking about a project of a very large scale, whether it be in the shape, the architecture of the exhibition, as much in the human, financial and material resources invested as in the content itself.

Moreover, the content of the exhibition, which follows a chronological order, has been determined to present a regional history that makes Gaspésie shine and that connects Gaspésie with the rest of the world. It is thanks to its geology, archaeology, economic activities, population but also its major events that visitors will be able to understand all these connections with the world.

What were the challenges you faced when you imagined this exhibition?

Martin Roussy: There were several challenges that had to be met on several levels. As this is a complex exhibition, even if on the surface things seem very harmonious, there were challenges. For example, the furnishings and the display showcases – the curved look, the different depths of the cases – all of that was custom built and it took a lot of work.

Another challenge was the creation of all the animations that are found throughout the exhibition: fixed illustrations that were animated afterwards by a specialized firm, Eltoro. This too, had a particular degree of difficulty attached to it. When you look at the curves of the islands, their creation was also challenging and there were many other similar challenges throughout the production of the exhibition. 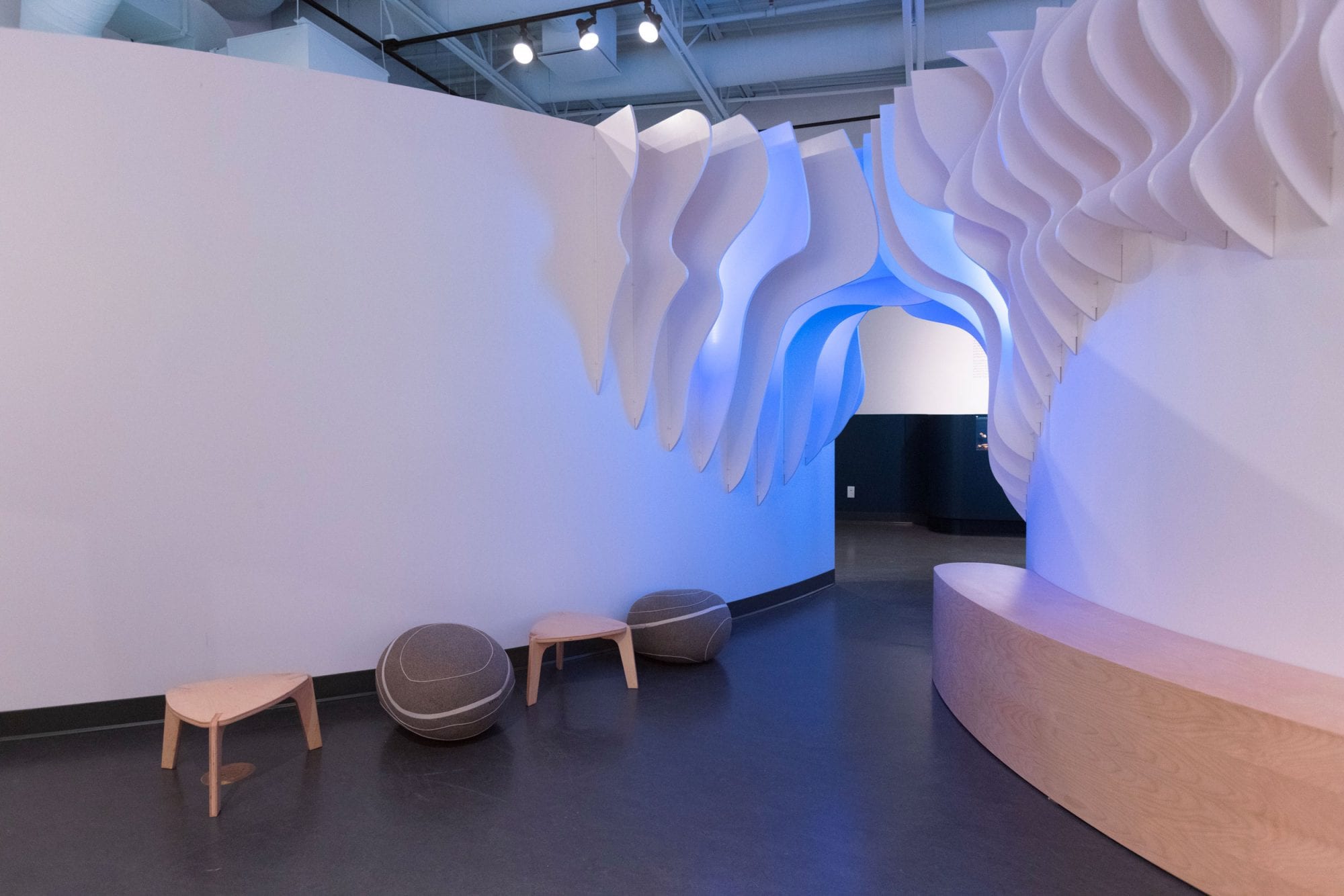 How was the collaboration with MASSIVart beneficial in overcoming these challenges?

Vicky Boulay: MASSIVart was able to listen to us, support us, but also bring innovative solutions to all these challenges. Their great skills in project management, combined with their acute sense of organization and detail have greatly facilitated all the coordination with the various stakeholders, collaborators and partners to achieve this exhibition. Something we particularly appreciated about MASSIVart is their great sense of taste, their particular aestheticism and their artistic approach that brings a unique touch to the exhibition, what I like to call a MASSIVart touch.

Can you tell us more about the involvement of the First Nations in this project?

Martin Roussy: We worked closely with the First Nations to bring this project to fruition. On the one hand, it is part of a worldwide movement of decolonization of history, which means that we are not only putting Indigenous history at the center of the Gaspé Peninsula, but we also involve the nation in the work to make sure that we integrate the subject matter properly and validate certain information.

It is in this way that we approached the Mi’gmaq Nation of Gaspésie which is composed of three communities, working with them to make sure that the exhibition was well done. Donnacona, who is an important character in Jacques Cartier’s visit to Gaspé, is an Iroquoian, so we also worked with the Huron-Wendat Nation of Stadacona (of Quebec) to make sure that we gave a point of view that is not always the one we have seen in history books, rather from an Indigenous Peoples.

What makes this permanent exhibition different from the previous ones?

Vicky Boulay: The way of telling and presenting content in an exhibition has greatly evolved in the last 15 years, especially because of the means of interpretation that have developed a lot. From the visitor’s point of view, their way of visiting an exhibition, their interaction with it and their expectations have changed a lot. We are also witnessing a professionalization and a multiplication of the participants in the exhibition projects, notably because of the use of technologies which are much more present today.

Martin Roussy: In that sense, the new permanent exhibition is a continuation of this approach that the Museum has decided to take over the last few years to update and modernize the way of presenting its exhibitions. In this particular exhibition, the technology is quite modest and not very ostentatious in its use. Instead, it’s very integrated and organic – which is how we managed to make the technology bring us back to something human, where we play on emotions. I think we have reached a more refined level of technological integration.